Peak Construction is a preferred contractor with over two dozen insurance companies, often receiving emergency assignments which require immediate response. It was 12:30pm on Friday, June 13th when we received an emergency board up assignment in Purchase, NY. We were there within the hour, attempting to scope the site, but police tape and emergency vehicles stopped us.

The board up was necessary after a small plane crashed on the property blowing out all the windows. The plane, piloted by noted physician and philanthropist, Richard Rockefeller, had left Westchester County Airport earlier that morning, but did not make it far in the fog and poor weather conditions before crashing through several trees, narrowly missing the house and horse stables also on the property. Rockefeller was reportedly the only person on board. He did not survive the crash. 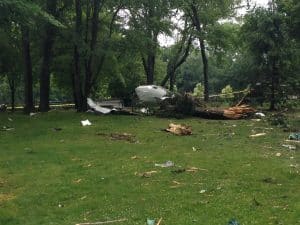 We waited nearby for officials to give us the okay to enter the property, which was littered with debris and jet fuel. Once we were able to assess the damage and speak with the homeowner, we immediately had a crew on site to begin the board up. Given the sensitive circumstance of the job, our team was only allowed on the property because of the security the board up would provide to the home. The homeowners had been through enough in one day, so our crew was very conscientious and took great care to be as discreet as possible. Our team worked quickly, finishing the job by 7pm.

Rockefeller had worked as a doctor for eighteen years in Maine where he lived. He also helped to establish the United States chapter of Doctors Without Borders, and was involved with research on treating post-traumatic stress disorder in Veterans.